Hi Everyone, hope you have all had a good week, for Mum’s that enjoy fishing it was nice to see some great conditions last weekend for Mother’s Day on the Gold and Tweed Coasts. Bit windy for the rest of the week with a small weather window to get out and about. Let’s have a look at what’s been happening.

With the cooler weather hanging around looking for a feed of Squid has been a good option for some Fisho’s landing a great feed of fresh Calamari. You can catch Squid during the daytime or night time, I prefer to pick a run in tide on the Southern Gold Coast giving better water quality and as the tide rises access by boat over some of the more productive weeds beds where the Squid hang out. We have two main species inshore to target, the larger Tiger Squid or the Arrowhead Squid. I recommend a average sized Squig Jig between 2 to 3 inches long depending on what they are feeding on. Also metal blade vibration lures work well in the deeper channels near the Seaway south to Marina Mirage area. Land based fishing can be better at night, the key is to find somewhere that has good lighting on the water, the light will attract bait fish which will also attract the predatory Squid. Some good land-based spots are Paradise Point Jetty, Grand Hotel Jetty and boat ramp, Sundale Bridge Jetty, Marine Stadium and the Gold Coast Seaway Rock Walls will all produce some quality Squid.

Reports again this week of some quality Tailor showing up along the Surf Beaches from the Tweed North to the Northern End of the Gold Coat and South Stradbroke Island. I still prefer to fish the incoming tide if targeting Tailor from the beach, the bigger fish will usually follow the bait into the gutters which are scattered along the coast. The Gold Coast Seaway and Jumpinpin Bar are also fishing well with some big Tailor showing up. Best tip is to keep your eye on the sounder for bait fish, also watching out for birds diving on the water can indicate fish feeding on bait. Best baits are whole WA pilchards, Mullet Fillet and White Pilchards, for the lure Fishos Tailor tend to respond well to trolling Shallow diving lures, Surface lures and Metal Slugs.

Brad from Brad Smith Fishing Charters reports the Tweed River is awesome this time of year. Mild and calm weather, Flathead and Mulloway are pushing upstream to their winter hunting grounds, I love it! The odd trip is producing some quality Flathead, with some big Whiting and Bream amongst them. Popping MMD splash prawns in honeybee colour over shallow water is getting the surface strikes, while in the deeper channels teabagging with Ecogear ZX40 blades in 440 and 447 colour and Samaki Vibelicious 70mm soft vibes in Ghost bait and White bait colours are getting plenty of solid fish. 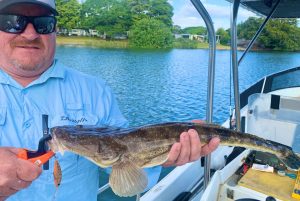 Clint reports in the Broadwater good numbers of bigger Flathead are showing up which is great to see, and expected this time of year. Samaki Vibelicious soft vibes and Ecogear ZX40 account for their share share of Flatties, in much the same colours as Smithy mentioned above, in the clear water normal for the dry months. The water temperature dropped to 20 degrees in the Nerang River after the cool weather. This will bring on more Flathead, Squid, Mulloway, Snapper, Flounder and more tasty species. A good time to fish is just past the full moon and into neaps, my favourite tides for working the deeper sections of the Northern Broadwater such as Currigee reef, Ephraim reef, around the Seaway, and the main channel East of Carters bank.

Gavin from Seaprobe Fishing Charters reports out on the shelf there has been Blue Marlin around Jim’s Mountain, Riv Grounds with boats catching up to 4 Blue Marlin a day and also the odd big Yellowfin Tuna  using lures anywhere from 8 to 15 inch lures. On The 50 and 36s Fathoms the current was raging up to 3 knots so very hard to fish but still few nice Snapper, Pearlies and Tuskys have been biting with the Dolphin Fish still around the fads. 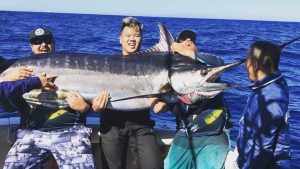 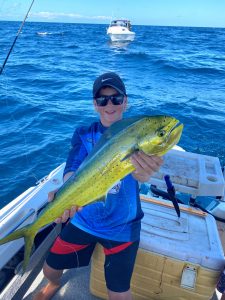 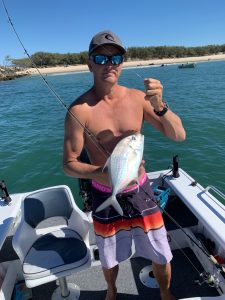 Hope you all have a good week and stay healthy and safe. If you have any great catches or photos you would like to share, please email us and let us know how you went.

Stay up to date with all fishing regulations in Queensland https://www.daf.qld.gov.au/business-priorities/fisheries

If you have any great catches to report or fishing photos please email them to  [email protected]    Good luck with the Fishing.  Brett