Hi Everyone, hope you have all had a good week, it’s nice to see our happy Houseboat customers back out on the water this week having a ball exploring our local waterways and catching feed of fresh fish. A bit of wind, the odd shower of rain and a decent swell hanging around the Tweed and Gold Coast, just pick your time and heading outdoors will be worth it. Let’s see what’s biting this week.

Local Fisho Ben White (see photo in report) did well scoring his bag limit on big Jew Fish from the close reefs off the Gold Coast Seaway, we have seen some great catches over the past couple of weeks which is a good sign as winter kicks in. Big bait schools will call our local waters home and finding these schools will be the key to landing the predators like big Jew Fish, Snapper and Cobia which are a prized catch and top eating quality. Make sure you have a good look on the sounder before choosing your fishing spot, if you are in the right spot you should be able to jig your live bait from where you fish, after all that’s what your target species will be eating.

It’s been great to see our Houseboat customers back on the water and scoring some good feeds of bread and butter species this week including Bream, Whiting and Flathead have been the main target for anglers in Broadwater and Jumpinpin area chasing a feed. Customers have done well scoring a nice feed from the Tweed River, Nerang River, Coomera River, Pimpama River, Jacobs Well, Tiger Mullet Channel, Whalleys Gutter, Short Island and Logan River. Prawns, Yabbies, Worms, Mullet Fillet or Live Herring are all great baits.

Brad from Brad Smith Fishing Charters reports well once again it has been a great week of fishing on the Tweed. Although we have not caught anything too big in size the numbers and variety have made up for it. Keeping a bend in the rod is what it is all about and being able to swap lures and techniques through the day is very exciting and eventually that big one will come along. In saying this we have caught the odd cracker Whiting and on most trips have been getting a few Flatties over 50cm. Jigging the deep holes with ecogear zx and vx vibes has been producing Flatties, Bream, Whiting, Big Eye and Giant Trevally as well as the odd small School Jew.

Clint reports on the water though we are seeing a typical winter pattern. The bigger Flounder and Squid have arrived in numbers, and the Flathead and Winter Whiting are increasing too. We should see schools of spawning Tailor over the next few months unless the netters take most of them. Ecogear ZX40 vibes in colours 415, 440, 447 and Ecogear VX45 vibes in colour 439 are doing well. Best of the Samaki Vibelicious soft vibe colour are white bait and ghost bait. This coming week I am fishing most days, and the Broadwater looks good, I will be fishing along the edges of the main channel South of the Seaway, and also near Marina Mirage, Anglers Paradise, Carters Bank, North Currigee, and Runaway bay.

Gavin from Sea Probe Fishing Charters reports on the 50 Fathoms Still Kingys, Amberjack some nice Pearlys and Snapper around use flesh baits pilchards squid and Live bait. On the 36 fathoms plenty of Dolphin fish on all the fads ,on the bottom at the 36s plenty of Tusk Fish also Snappers and Pearlies with odd big Samson fish being caught. On the 24s fathoms Cobia have been starting to show up with the Whales coming through live bait is the key and don’t be afraid to throw down a big live bait. 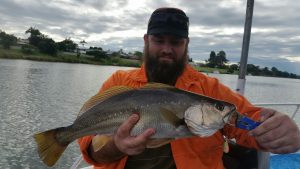 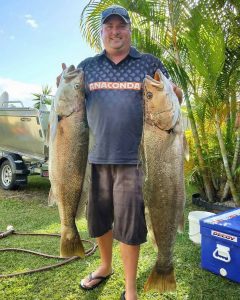 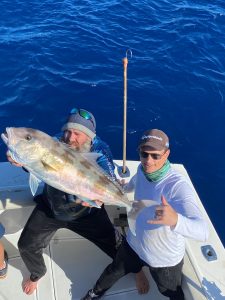 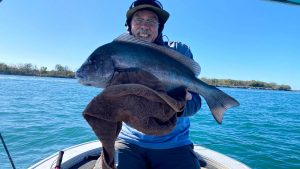 Stay up to date with all fishing regulations in Queensland https://www.daf.qld.gov.au/business-priorities/fisheries

If you have any great catches to report or fishing photos please email them to  [email protected]    Good luck with the Fishing.  Brett